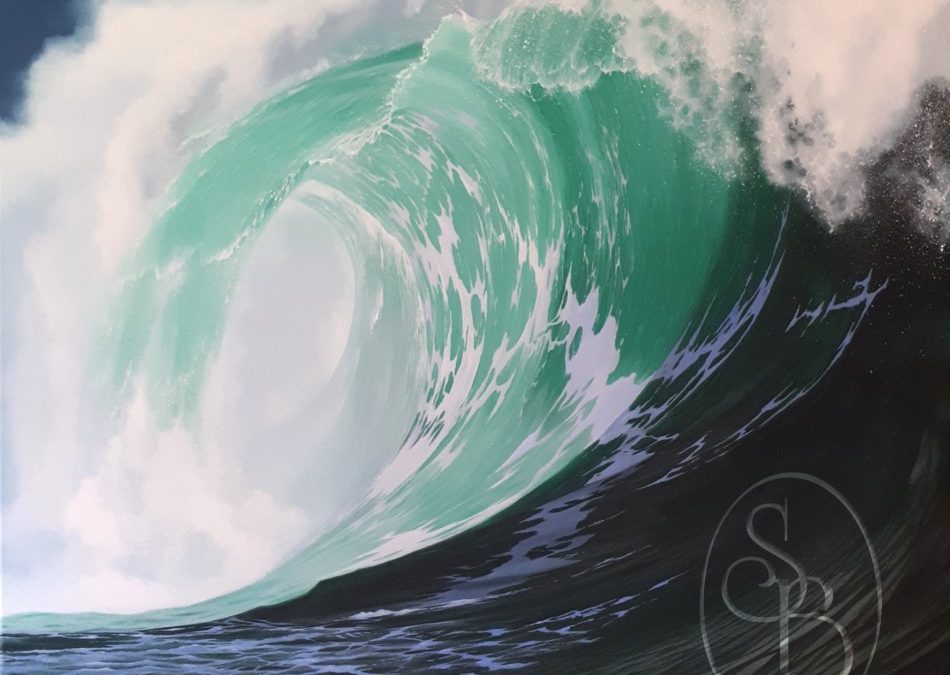 Me? I can’t swim a stroke – you may recall I spoke of my power floating in a previous blog. I can, especially in the Caribbean, float around for hours and in a calm sea I can cover a considerable distance – on my back – but it has it’s downside. I can see where I’ve been but don’t have a clue where I’m going – so unless I remember to periodically paddle around in a circle, I’m forever bumping into things; people, mooring bouys, fishing boats etc.

Have I tried swimming properly? Often, and always with the same result. My legs sink, they come round under my body, and I’m on my back again. I’ve stopped fighting it 😀 It isn’t tiring and, now I’ve mastered it, it would probably save me from drowning, but it has it’s limitations – I would have very much like to have had a crack at surfing – and that’s never going to happen – but it doesn’t stop me from dreaming.

My latest painting is a surfing wave, a big curling breaker. I can’t pretend it’s a wave I’ve seen myself, although I have seen some awesome waves on the East coast of Barbados, it’s a conglomeration of intuitive art (painting from the head as it’s usually called) and much of what I’ve seen in books and on TV (I have a DVD of the awesome Jaws in Hawaii). That said I’ve spent enough time staring at the waves here in The Witterings to have a feel for them. The light and shade is a bit over the top but it works I reckon. 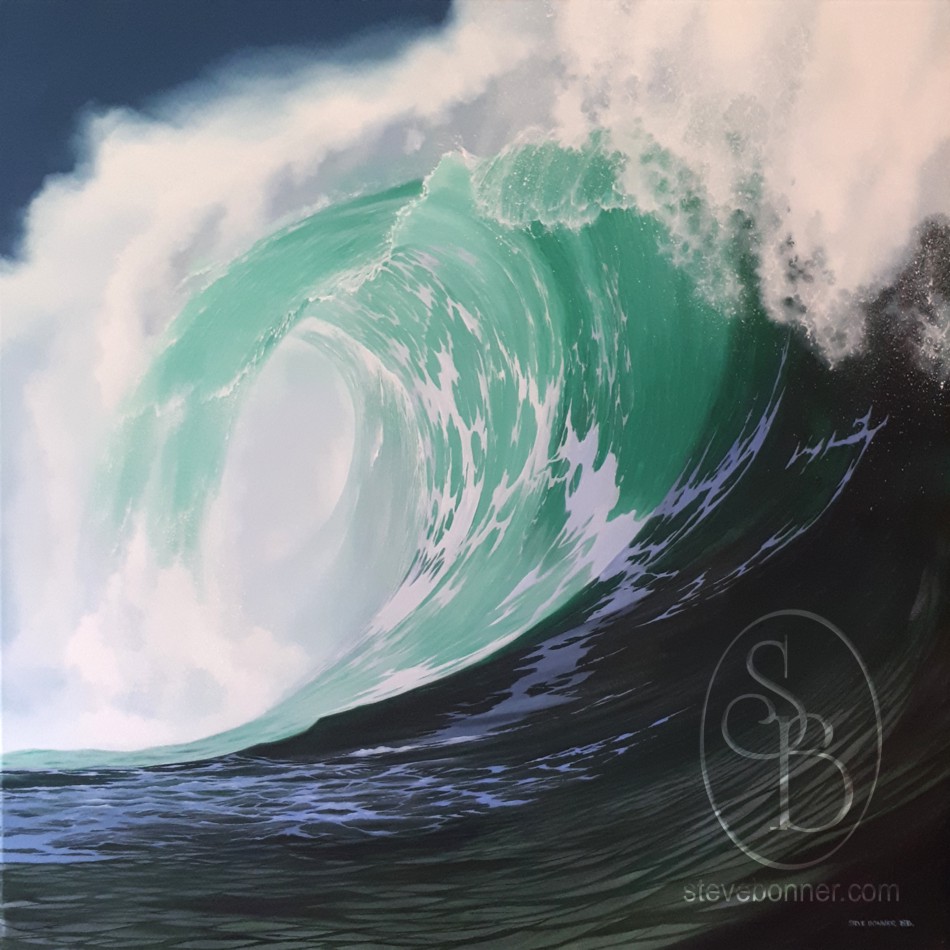 It’s a strange thing y’know. It was on the easel before I left my gallery last year and one of the local surfing community, a nice bloke, had found his way up there: I don’t know how, it might have been raining or he might have been lost

. The painting at that point was little more than block colours (I shouldn’t really have left it where it was visible) and looking at it he asked what was going in the top right corner. I explained that it was going to be tumbling spray. “But waves” he said “don’t do that!”

This – I have to say – is one of the downsides of being a figurative painter. I remember some 30 years ago, when I was painting a lot of sailing ships and yachts for a gallery in Poole, being told by some sailor that the sails were wrong for the wind direction. “Are they!” I asked, feigning shock horror. I longed to tell him that I knew they were right because, not only was I a yachtsman myself, but it was painted from a series of photographs I’d taken a couple of years previously. But no –  “Smile and wave” as the penguin in Madagascar said “Just smile and wave”. There’s always one – and I guess it’s true for any artist – as long as one hangs ones heart on a gallery wall it’s an open invitation for someone to have a pop. It’s actually normal for a wave to break at different points along it’s length – it’s comparitively rare for the break to start at one end and run the whole wave. I don’t know why, if I ever meet a  Physical Oceanographer I shall ask him. The wave is right!

Anyway, back to the painting. It’s pretty big at 80cm square (31” x 31″), painted edge regular canvas, and is executed in oils, largely in Prussian Green – a fabulous colour, unlike most greens it loses none of it’s intensity when knocked back with white. Possibly not the most realistic ocean colour but it works brilliantly – well, I think it does anyway.

If you want it it’ll cost you £1,500.00 – for the time being anyway – in the near future I’ll be putting my prices up considerably, back to where they should be, so don’t leave it too long making your mind up.