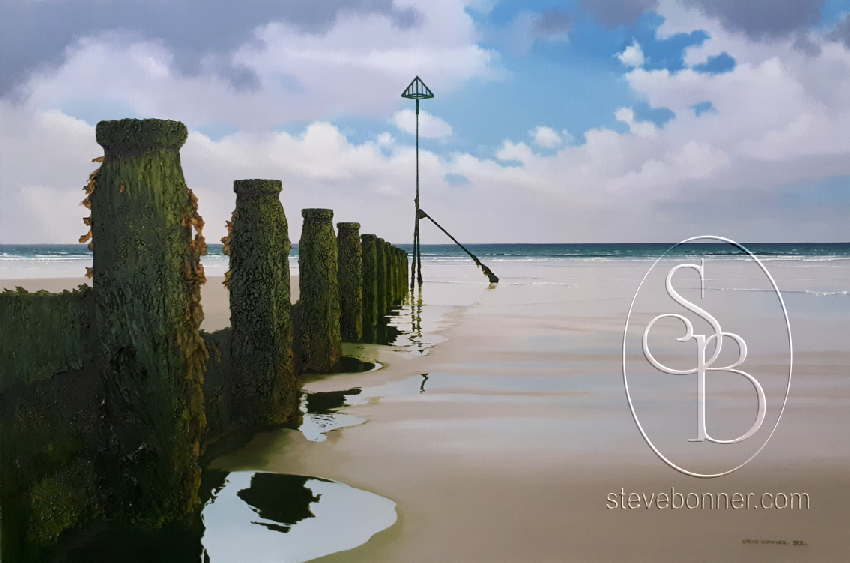 I’ve painted another one! In case you’re an avid reader of my blogs (is there such an animal, I wonder) you may well look at the picture above thinking “Haven’t I seen that before?” Well you haven’t! It’s new!

Yes, it is a groyne in West Wittering (but not the same one) and yes the viewpoint is almost identical to the first, and yes, it did involve getting a wet arse again, squatting, camera in hand in the wet sand, but it is different.

Another big difference is the sand and puddles. Painting number one was a nightmare to paint – the complexity of the sand and water, the slopes and shading, the reflections, taking days to paint – this one wasn’t easy but was a far more relaxing paint than the last. The treatment of the groyne, the heavily impasto underpainting in acrylic gel (a fraction of the cost of oil paint and dries overnight – the same thickness of oil paints would still be wet nearly a year later) is very similar and, frankly, I’ve no excuse – I enjoyed painting it so much I wanted to do it again. To my mind the best reason in the world for one painting, eating, drinking, doing anything more than once is because one enjoyed it immensely 🙂

Am I going to post another pic of the first painting so you can compare them? No, I’m not. You can rumage through all the past blogs until you find it – possibly the only way they’ll ever be seen 😀 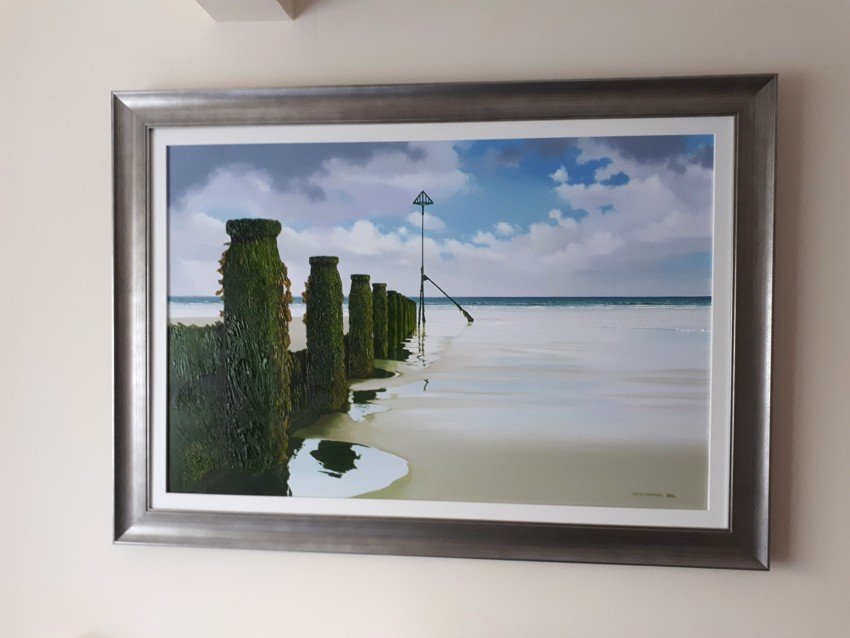 And I’ve framed it – and used the last of my distressed antique silver moulding too. Now should anyone reading this blog like the look of the painting and want to see it drop me a line or call me and I’ll drop it round in the back of the trusty Volvo so you can see it in your own home – assuming you live in a dozen or so miles of Chichester. Any further away and you’re very welcome to pop down here – I’ll put the kettle on (Adequate ventilation, masks, sanitisers etc go without saying).

I’ve put a new page on the site ‘Featured Painting’ which, not surprisingly features this one. It shows the painting in a rather avant-guarde bedroom setting (not mine I hasten to add) which gives a good idea of the size of the painting. I rather like the idea of a featured paint every month and will keep it up I think – so watch this space*

* Apparently the name of an Australian Kids TV series in 1982. The first use of the phrase? no idea, but if you know an older one let me know please.

Nearly forgot – the painting is priced at £1,500.00 because I’m skint. It should be three times the price!