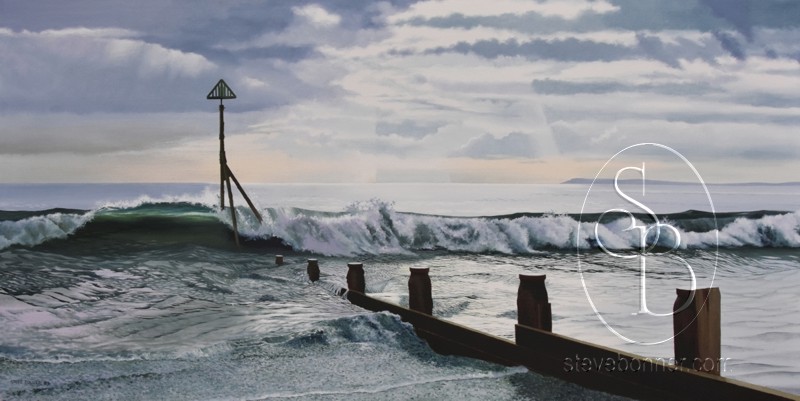 I sometimes wonder how I’ve ever managed to sell any paintings at all, let alone make an approximation of a living from them – but somehow I do. I’m not represented by a single UK gallery of note (various reasons – largely self-inflicted), I only have an exhibition once in a blue moon (my wife, my Ruth, finds it hard to deal with the accompanying angst) and I have a website usually only visited by mistake. Add to this a Facebook page which boasts a singularly unimpressive 175 likes – there are chimpanzees, who cheerfully daub away with a wallpaper brush and a pot of paint, who have more likes – a lot more likes – as have the galleries that flog the stuff.

Anyway, for some reason or other – very possibly mild panic at my advancing years – I’ve decided to become a little more pro-active. Not only is it my intention to have a one man show next year (much to Ruths horror) but I’ve just submitted three canvasses for consideration for The Royal Society of Marine Artists annual exhibition at Pall Mall Galleries this year. I know! Shock horror!

Any chance? Who knows – it’s in the lap of the Gods really, or to be more precise, in the lap of the members of said society which amounts to much the same thing in my book. I’ll let you know next month if I’ve made it past digital submission.

As it happens ‘digital submission’ is one of the reasons I don’t get on with galleries. I know it’s part of their ‘process’ but why insist that I waste time gathering up jpegs (of not more than so and so megs), writing yet more resumes, biographies and the such, when following a url to my website will explain all. It’s not as if I’ve just taken up painting after half a dozen evening classes or holiday school in Provence – I’ve been doing this for years and frankly, I’m pretty good. Rocking on for seventy as I am I take a dim view of being put through hoops by some ______ whose major achievement is looking down their nose, banging nails in a wall and bullshitting. Frankly a little respect wouldn’t go amiss! It’s worth mentioning that the Royal Societies and Mall Galleries only ask to see the digital images of the work you intend to submit, then the works themselves – nothing more – and that’s how it should be – after all, a painter is only as good as his last painting.