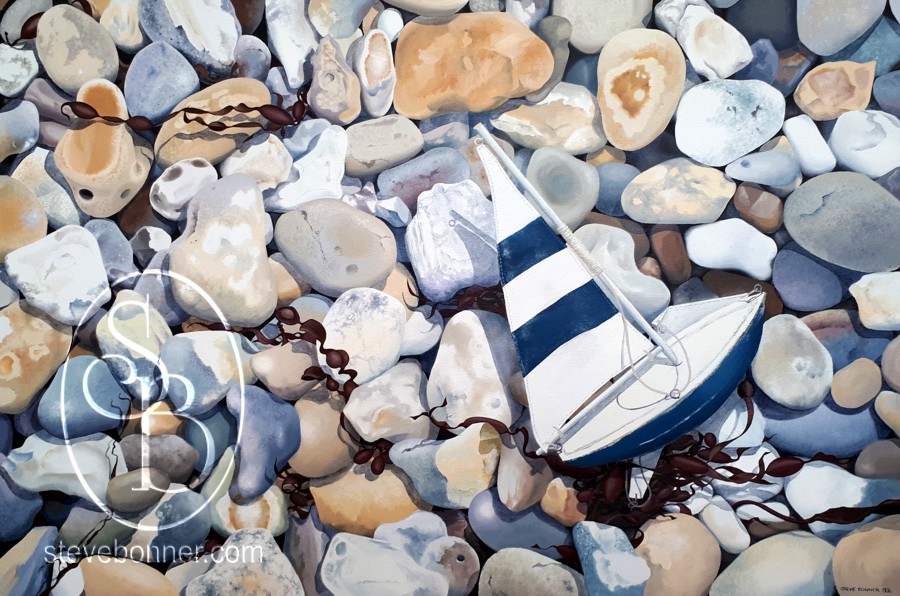 Why did I ever think it would be a good idea to paint a close-up study of a pebble beach on the high tide line? Not my first attempt as a few years ago I painted ‘Turn of the tide’ (still one of my favourite figure studies). It was the fourth in a series of figure paintings, each very different, which used the same model, throw, and two seat sofa as props.

Because my model lived in Southsea, within a few hundred yards of a very pebbly beach, it made sense to use elements of this location in this particular composition. The black ‘horizon’ marks the skirting board behind the sofa and the title of the painting is, as you’ve probably guessed, a small pun. The model’s covering her face, not because she wasn’t pretty, she was and is, but because I’d discovered by that point that the British public feel uncomfortable if the model’s looking back at them. Sounds bizarre but very much the case in my experience – I’ve seen people stare for ages at a study with a gracefully turned head but scurry past the next painting which has a full face. Says something about the British collective guilty conscience I suspect.

I was actually offered what might have seemed a good price for the painting at an exhibition some years ago – unfortunately, when gallery commission had been deducted, it would have been next to nuppence in my pocket so I turned it down. It graced the wall in the dining room at Coles for some time and I’d be reluctant to sell (which is why it’s on the website as being sold), so if you want it be prepared to dig deep – well, deep’ish anyway!

Back then I used real stones, collected from Southsea, in the studio – a fair sized pile of them. Now, not only do I know better, but I know removing stones from the beach is, and probably was, actually illegal, and so it should be – we live and work not only close to the sea but not much above sea level and that pile of pebbles is all that’s stopping us from getting very wet feet if there’s a substantial storm surge – so for this new painting it was photographic reference – lots of it. This is because I not only wanted to choose from some of the more interesting stones but I needed to know how their shadows fell, and how they lay together. An interesting point that: one would imagine, tossed around by the sea as they are, it would be totally random, but it doesn’t seem to be. The stones appear to interlock somewhat as they settle and slide together. The washed up toy boat by the way, which is pretty much the subject of the painting, has never actually been near the ocean (unless you count the thousands of sea miles it spent in a Chinese shipping container) – it was bought from the gift shop down the road in East Wittering, carefully ‘distressed’ in the studio, and painted into the scene. I thought it would be plain sailing when I first put brush to canvas but having begun the painting I started to slowly go mad! Pebble after pebble after pebble – there seemed to be no end to them. A quarter of the canvas covered, a third, a half! On and on it went – interminably. If it sells quickly I shall undoubtedly grit my teeth and paint another, but believe me – I’m in no rush!

But here it is – finished (Pic at the top of the page) I intended calling it ‘Pebbles 1’ (as imaginative as ever) but I’m thinking ‘Run Aground’ might be more appropriate – Thankfully I never actually achieved that state during my years as a yachtsman but it was something that was on my mind constantly – A painted edge box canvas, it would suit any modern decor, and it’s yours for a mere £1,100.00 – a labour of love, and I deserve every penny I promise you!

Small note: You may have noticed if you’re a regular reader (I shall make no observations about my following) that the blog format has changed. This is because I’ve moved it from Googles Blogger to WordPress. Two reasons: blogger isn’t a popular platform with just 1.2% of the market and there’s every possibility that Google will simply drop it (wouldn’t be the first time they’ve done this with a Google app) and drop my blogs with it. Secondly, one could only comment on the blog if one had, and was logged into, a Google account. Thus I’ve migrated everything to WordPress which is hosted and stored on my own domain – now anyone can comment and my blogs are safer (providing I don’t forget to pay the hosting fee). To be fair, I don’t think WordPress as a blogging platform is as good, there’s less control over text for one thing, but I think the pros outweigh the cons.

Thanks for reading. Pip, pip,