I’ve got a backlog……

A backlog of pub chalkboards. Damn!

Sounds a little ungrateful doesn’t it.  The trouble is yesterday the sun moved north of the Equator – Spring has sprung – and I want to be starting on a new dawn oil painting – you know, all fresh, clean, blues and pinks. I’ve always thought of the dawn sky as being clean and the sunset, although there may be little actual difference in the palette, as being a bit grubby. Does that make sense? Mornings down on Wittering beach are stunning at the moment – truly.

Anyway, I can’t – not until I’ve cleared some of these chalkboards. The back-up has occured because the big pub in Bognor was late with the copy and the local drinking house – The Spotted Cow in Hunston – have given me two monster boards (I can barely lift them) and they don’t think they want colour on them!! Dull to look at, dull to read, and dull to paint! I’ve sent them a snap – hopefully they’ll change their mind. 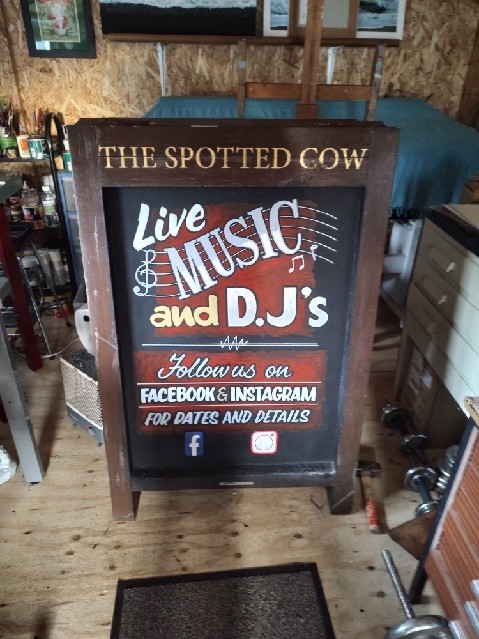 What do you think? It’s alright isn’t it?

Trouble is with A-Boards, they can’t be painted in their entirety on the floor – too close to the ground to paint the bottoms – my arms don’t bend that way, and I can’t put it on the studio easel – way to heavy. This one was made with dowels rather than screws and having been left outside all winter had dried out so much in the studio that  when I lifted it off the table it fell apart. Oy vey. The Club Hammer lying next to it was used to persuade it tto go back together. Studio’s a bloody state isn’t it – must do something about that.

Anyway – now I’ve bored you so much you’ve already gone off to look at Facebook, I’ll address the reason for this blog (before I came up with what I thought was a snappy title and distracted myself) – which is the new painting at the top of the page! It’s framed, it’s available from Billy’s on the Beach (for a mere £450) and it’s a bit lively for me 🙂 Like it?

I’ve often thought my green seas sell a little faster than the blue ones. – no real evidence, just a notion. The blue is more realistic – even if the days it achieves that wonderful colour are few and far between. Did you know the Ancient Greeks didn’t have a word for blue? Not a one. The word kyaneos descibed all dark blues, greens, browns and black. and the word glaukos all light blues, greens, yellows and greys. Kyaneos is where we get the word Cyan from by the way.

This is a WordPress site and I use Yoast SEO to try and stop it disappearing into well deserved obscurity. This is Yoast’s critique of my writing – makes me want to spit! 😀

Passive voice: 16.7% of the sentences contain passive voice, which is more than the recommended maximum of 10%. Try to use their active counterparts.

Subheading distribution: 1 section of your text is longer than 300 words and is not separated by any subheadings. Add subheadings to improve readability.