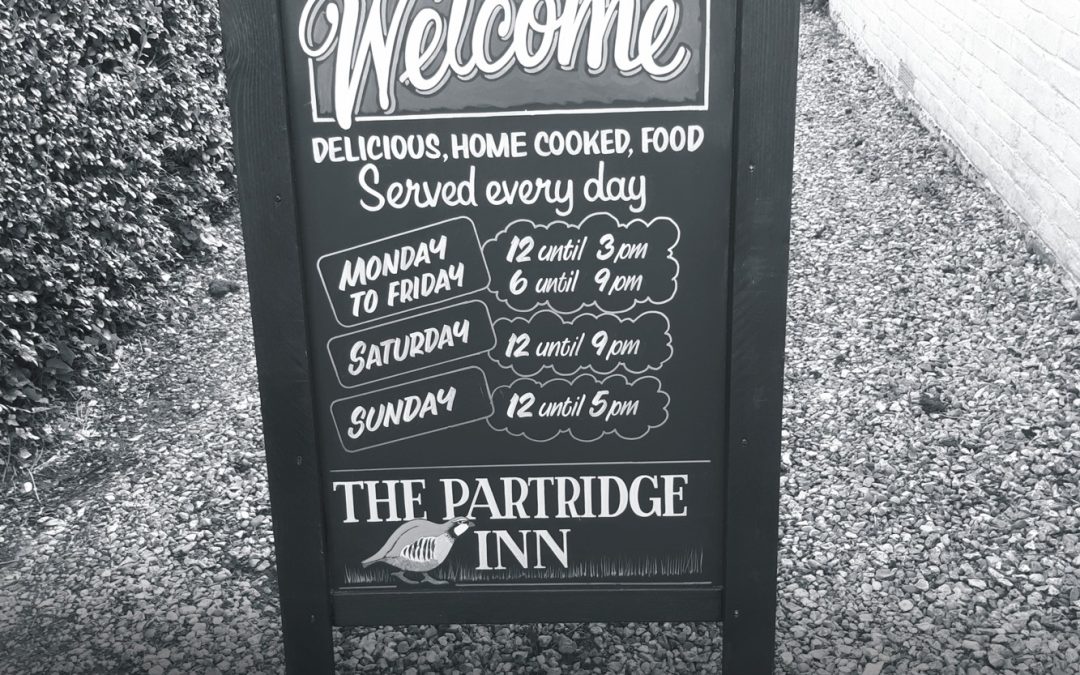 The ‘locals’, it seems, don’t like colour on the pub signs!

You know, I wrestled with putting this post up at all, but then, in keeping with the old adage “Never piss off a signwriter”* I thought to myself, why the hell not! Harry Hotspur, wasn’t it, that Shakespeare had utter “For I will ease my heart albeit I make a hazard of my head!” It’s true Hotspur was rather more of a warlord than chalkboard artist but I think even a humble scribbler can aspire to the occasional ‘grand geste’.

The sad demise of the British Boozer.

Pub chalkboards and A-boards have a purpose – to promote the pub and advertise various products, evenings, and events. As we all know, pubs have closed in their thousands in recent years. Smoking bans, lockdowns, staffing rules and regulations, amongst a host of other reasons, have slowly, but inexorably, driven them to the wall – never to be seen again. Those who survive often have to fight hard to stay in business in an ever shrinking market.

Most pubs write their own boards and the standard varies enormously. I write for The Partridge Inn because I work occassionally for the parent company who successfully own and manage several good pubs in the area. Would I be working for this one if I didn’t? I’ve no idea – but probably not.

I called in Friday past to pick up some boards to re-write and was astounded to learn the landlords wanted them painted simply white on black – the locals didn’t like the use of colour on the boards! I’m sorry! What?! The landlords, justifiably, feel they must placate the locals. But I ask you?

Chalkboards are meant to be seen and read – and colour attracts the eye. Take it away and you take away the impact of the board. You severely lesson it’s chances of working. Perhaps the locals will consider that should the pub slowly fail and once more they find themselves sipping their Designer Gin’s around the kitchen table. Perhaps they will still consider their stance justified.

Now I’ve lived many years in a snooty country village – in Hampshire it must be said, not Sussex, and what a wonderful place it was. I’m speaking of Buriton (I’ve written of it in a blog before), a village of 500 souls, tucked away under the South Downs. The village had two good pubs, a village shop (my great uncle once ran it.  It was latterly discovered to be worth much more as a dwelling 🙁  Very sad.), a school, a pond, and a delightful little church. These were pubs where the gentry and the labourers laughed and drank side by side and, to one degree or another, knew and respected each other. Johnny, the landlord of (to my mind) the better of the village pubs, The Five Bells** had made such a success of it (320 covers one Bank Holiday Saturday would you believe!) he was made an offer he couldn’t refuse and, sadly for the village, he sold it.

The first thing Hall and Wodehouse did was to install a publican who had previously run an inner city pub. Oh, dear. We can none of us understand, to this day, how a brewery, supposedly professionals in the victualling trade, and having just spent an extraordinary amount of money on a thriving business, could have misjudged so disastrously.

Within days the pub changed out of all recognition. All the lamps now had 100 watt bulbs, framed football shirts replaced the dull but tasteful country scenes on the walls. and the landlord, bless him, who was obviously, at least as far as the village was concerned ‘not quite the thing,’ greeted his customers in a variety of Crimplene suits. We are talking Buriton here, where all, from the Manor to the Council Estate, were well aware Crimplene was far from ‘de riguere’. The village’s reaction was unanimous, immediate, and decisive.

Perhaps Singletons residents should think on that calamity for a few minutes.

Would we, the residents of Buriton (to my mind a far more charming and more desirable village than Singleton) have objected to a little colour on the pubs chalkboards? No, Sir, no, Madam, we would not! (I know this because I wrote quite a few of them).

On the left (above if you’re on a phone) is one of the offending Partridge chalkboards.

Is it illuminated with flashing neon? It is not.

Is it written in vivid day-glo colours? It is not.

It is a traditionally hand painted pub sign – and quite well done to my mind 🙂 If it has any faults it’s that (since the snap was taken eight months ago) it’s been left out in all weathers, including gales (despite my having suggested to the landlord that it shouldn’t be), and is consequently muddy and bashed to ____! Why nobody ever cares for, or even wipes down, their signage from time to time bewilders me! Every pub employs a company muppet for Gods sake!

I suppose it does seem rather an over reaction doesn’t it? The worse that may befall me here is that I’ll offend the worthies of Singleton, and/or the pub, or maybe even Sussex Inns, to the point where they decide they can dispense with my services. Sad, but not the end of the world. Worse things have befallen me in my 71 years.

My issue is that if I decide to sell my time to someone, if I take the Kings shilling so to speak, I have a responsibilty to do the very best I can for my customer, or indeed His Majesty. My signs might not be to everyones taste but they work, and I resent that being interferred with.

The second reason is that colourful, creative, signs are enjoyable to do – black and white are far from enjoyable, in fact they’re deadly dull. Yes it pays, but frankly I don’t like doing them. Simple as that.

A conflict of interests

It’s a funny thing you know but just last week I was asked to paint a board for a pub in the very next village to The Partridge – The Fox goes Free in Charlton. I declined because of it’s proximity – the two are pretty much in direct competition. How about that? What I wonder was the Universe trying to tell me?

* The saying “Never piss off a signwriter” came about years ago. The trade had a very simple way of addressing grievances. Signs would appear shaming the offender. Good, huh! I’ve considered it briefly 😀

** The Five Bells remains one of my favourite pubs – and they still sell my woodland paintings.

Our pal Johnny, landlord of the Five Bells, bought the terribly run down Fox goes Free for a song about thirty five years ago. He turned it around as only he could and sold it on for a significant profit.

I’ll tell you a story about that. John had his wonderful, but ferociously sharp witted bar manager ‘Ingy’, from The Bells, run the pub. One busy Sunday lunchtime a dwarf (can I still say that? To the vertically challenged, if offended, I can only convey my sincerest apologies) came into the pub and stood waiting at the bar. Ingy continued serving everyone meticulously in turn until he came to the dwarf. The pub was silently waiting – and just a little worried. “Right, Lofty, what can I get you?” The whole pub, including the dwarf, fell about laughing. Marvelous. A true pub professional.

Just before I go it might seem as if I’ve been slagging off The Partridge – not so. It’s a great little pub and the new landlords are doing everything they can to make it better still. I wish them every success. The garden is large and wonderful – I only hope the flowers aren’t to colourful this year 😀

You’ve been very patient, thanks for reading. Pip, pip,